YiFan Machinery thrown oil against cone crusher cause of the

Recently, a customer received YiFan Machinery reflect overhaul , water and dust seal found in the water with oil, and lubricating oil return temperature is high , but in the past year using normal equipment , operation and maintenance are also strict operation and maintenance procedures in accordance with use . Receiving feedback , YiFan Machinery actual investigation and research problems immediately to determine which is the cone crusher rejection oil problem, the following analysis of specific situations .

Rushed to the scene, after practice disassembly found 10 watts bowl seat bolts are 9 loose, one has been broken ; eccentric sleeve shaft sleeve has been installed floating , fixed metal sleeve between the eccentric has All gone, has an angle of rotation between the sleeve and the eccentric bushings, the other missing installation size did not change much . 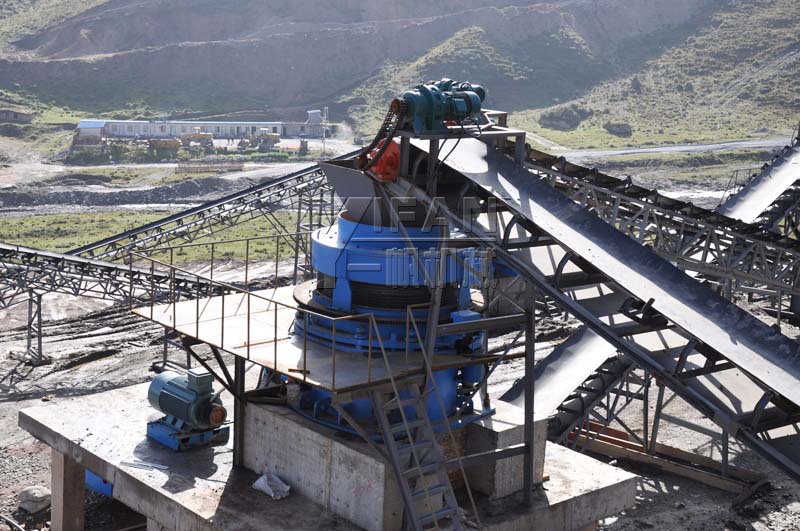 Dust and water with oil appears there are two possibilities, one is hydraulic oil lubrication system is too high or too much oil supplied , in part because oil is not enough oil return passage directly into the dust and splashing water caused . Another is caused because the spindle coaster oil splashing into the water caused by the dust .

For the first possibility , first check the cone crusher rack bushings are loose or other phenomena , if not, it can be inferred with the gap between it and the eccentric is no problem, it can be concluded that caused the crusher spindle coaster and lubrication mainly oil temperature gap between the spindle and the spindle bush caused reduction .

The second case , the spindle generates dynamic cone coaster phenomenon is mainly to reduce the gap between the spindle and the spindle which led to the drogue .

In summary , because the cone crusher dust with oil in water is high and the return oil gap between the spindle and the spindle bush caused . 10 watts bowl seat bolts are 9 loose, a phenomenon already broken , can be inferred because of the fixed alloy spindle bushing and loosening caused .

In addition, YiFan Machinery also remind you that in order to ensure the normal operation of the cone crushers , between certain sets of equipment to ensure that the main components in the rack bushing and eccentric shaft , between the shaft and the eccentric bushing moving cone spindle shaft mounted reasonable gradation gap , in order to ensure a reasonable lubrication , and ultimately achieve normal operation of the device between the various components .